“Let them praise his name in the dance:
let them sing praises unto him with the timbrel and harp.”
Psalm 149:3, The Bible.

The harp is one of the oldest known stringed musical instruments.  Images dating back to 15,000 BC of harp-like instruments have been found in cave paintings in Ariège, Les Trois Frères region of the French Pyrénées.  The word ‘harp’ or ‘harpa’ originates from the Anglo-Saxon, Old German and Old Norse words, meaning ‘to pluck’.

Ancient harps were built from materials found in nature, such as wood, bone and hide and the strings were made from natural fibres, including gut, hair or plants.  Their size varied from hand held instruments, to 6-feet high harps and there was a wide range of shapes, including bow, crescent, angled and triangular.  Harps have a sound box to allow the musical vibrations from the strings to resonate at a greater volume. 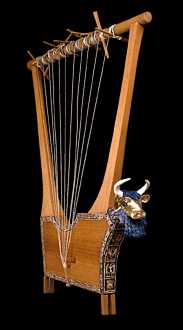 Images of bow harps have been found in ancient Egyptian hieroglyphs. Harpists would play to accompany religious feasts, funeral lamentations, processions and general festivities.  Angled harps were played in ancient Assyria and Mesopotamia, where lyres were also very popular, which have fewer strings (see The Story of the Lyre).  The Egyptians, Assyrians and Mesopotamians all revered the harp as a sacred instrument, which they believed could aid the soul through transition from the physical life to the afterlife (see Harp Music Assisting Souls Through Transition).  The Ancient Greeks and Romans followed the Egyptians by using harps and lyres at religious ceremonies and worship, as well as at feasts. 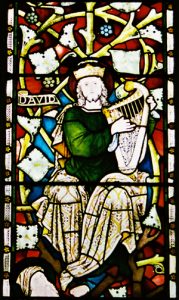 Harmonious harp and lyre music has soothed mankind with peace and relaxation since ancient times and musicians played music to heal disease.  The Bible tells us of David playing his harp to relieve Saul’s depression (listen to King David’s Harp by Michael Levy).  In the 6th century BC, the Greek philosopher Pythagoras prescribed certain notes or pieces of music, which he described as ‘musical medicine’, to treat many ailments.  It has been said that Alexander the Great’s sanity was restored by music played on the lyre (356 to 323 BC).

In early Christian worship, harps were used to accompany monks’ voices during their chanting services.  In the early church, the harp was considered to be one of the few instruments pure enough to be allowed in worship, where it was also believed that some instruments encouraged negative behaviour.  The Papal Music School was founded in Ireland during the fifth century, where the harp and lyre were taught. 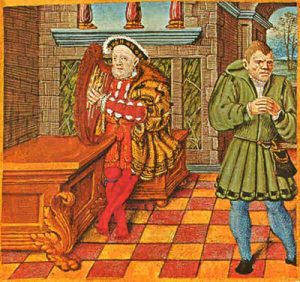 The custom of harp playing in royal courts has continued to re-emerge through time – both King Henry VIII and Mary Queen of Scots played the harp.  The instrument was also widely used in the court of Queen Elizabeth I (1533 to 1603) to soothe troubled nerves.  In 2000, Prince Charles revived a tradition of having Welsh harpists, by appointing an Official Harpist to the Prince of Wales.

Throughout time, the harp has been closely connected with spirituality and healing and has been described as creating a bridge between the physical and non-physical worlds.  The instrument has captivated mankind with evocative sounds, creating music to reconnect us to our spiritual roots.  In the last half century, the harp has begun to be used again as a healing tool and scientific studies have demonstrated beneficial effects of listening to music from the harp.

I feel fortunate to be able to play the harp and am aware of the spiritual connection, which is enhanced by regular practise of the Emerald Alignment, to allow the music to flow through my body and into the strings.  Little Flower is an example of music played after practising the Emerald Alignment.