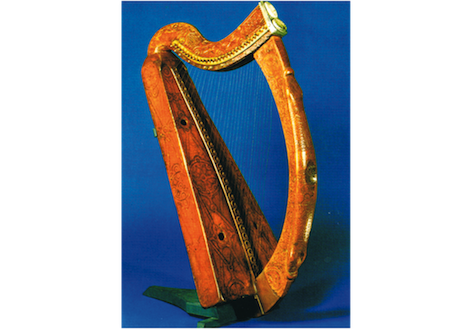 The Harp
Healer of each wounded warrior,
Comforter of each fine woman,
Guiding refrain over the blue water,
Image-laden, sweet-sounding music!

From The Book of the O’Connor Don

In Celtic mythology, we’re told about The Dagda (the Good god of the Gaelic gods) who was a king within the fairy race known as the Tuatha de Danann.  The Dagda had a magical and enchanting harp, which he took everywhere and which would come to him when he called.

His harp had the Three Noble Strains of music bound into it.  Each property or strain had a different effect on the listener:

1) The Goiltai or ‘sorrow strain’ caused people to weep.
2) The Geantrai or ‘joy strain’ encouraged people to laugh.
3) The Suantrai or ‘sleep strain’ lulled people to sleep.

A story is told of a battle between the Fomorians and the Tuatha Dé Danann where the Fomorians stole The Dagda’s harp and hung it on a wall in their hall.  This enraged The Dagda and he set about retrieving the harp with the help of his son Aengus Og.  They carefully advanced to the Formorians’ camp and soon heard the sounds of feasting in the hall.  As they approached the doorway, they could just make out the harp hanging on the wall through the smoke and the candle light.  The Dagda boldly entered the hall and summoned his harp with the enchanting words:

“Come apple-sweet murmurer.
Come, four-angled frame of harmony,
Come summer, come winter,
Out of the mouths of harps and bags and pipes!”

Another story is told of The Dagda’s harper, Uaithne, the husband of the River Goddess Boand (the Irish river Boyne).  When Boand gave birth to her first son, she cried out in pain and to ease her discomfort, Uaithne played the Dagda’s healing harp and they named the child Goltrai.  At the birth of their second son, Boand laughed out loud for joy and they called their son Geantrai.  Their third and last son was the easiest birth and Boand fell asleep to Uaithne’s harp playing so they named the child Suantrai.  Like their father, all three sons became great harpers and many folk believe that they passed on the harping traditions of Ireland and Scotland.

It has also been said that much of the beautiful Celtic harp music that has been created since these times, has been composed by those who have overheard the fairy folk of the Tuatha De Danaan playing their harps from the non-physical world.

Harpers are privileged to be able to play The Three Noble Strains upon their harps, which can bring about a positive and healing effect upon the soul by playing harmonious music from the harp:

The sleep strain lulls those experiencing burdens and anxiety into deep relaxation: Penguins

I am grateful for the privilege of playing the harp and am aware of receiving a connection to The Three Noble Strains of harp music through regular practise of the Emerald Alignment.