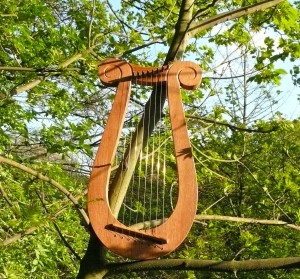 “Awake, my soul! Awake, harp and lyre!  I will awaken the dawn.”

The lyre is an ancient musical instrument that has a sound box (or resonator) with two arms connecting a crossbar and strings of similar length running parallel to its length.  The instrument has changed through time and place, with variations in the number of strings, how it was held, the materials the strings and bodies were made from and whether it was plucked, strummed, or played with a plectrum.

Lyres were played in many lands across the ancient world.  The oldest known surviving lyre dates back to 2800 BC in Sumeria.  The Sumerians held their lyres vertically, with the crossbar at the top. The Egyptians played them with the crossbar pointing out away from their body.  The Saxons would accompany their evening fireside storytelling by strumming music from the lyre.

In Greek Mythology, Hermes made the first lyre using a tortoise shell for its body and cow gut for its strings.  Hermes gave this lyre to his half brother Apollo as an apology for stealing his cows.  Apollo was the Greek god of music who built the walls of Troy with his beautiful lyre music.  He gave his son, Orpheus, a golden lyre and the muses taught him how to play.  Orpheus went onto tame wild animals, encourage trees to dance, move rocks and change the course of rivers with his beautiful lyre music and singing.

Lyres were used widely in Ancient Greece and both Pythagoras and Plato were accomplished lyrists.  A story is told of Pythagoras walking down a cobblestoned street playing the music of the spheres on his lyre, when the light of the moon reflected off a dagger from a man hiding in the dark.  The man jumped out to attack Pythagoras, who responded by playing a piece of music on his lyre.  The music went straight to the depths of the man’s soul.  He was so overcome by emotion from the feeling that the music stirred up in him that he dropped his knife and fell sobbing to his knees.

Pythagoras played musical medicine on the lyre to heal the soul by prescribing certain notes or melodies to heal anger, depression or negative emotions.  In his school in Croton, in the mornings, Pythagoras played certain types of music on the lyre to awaken students from their sleep and bring them positively into the day.  He also played calming music in the evening to guide students into a positive, sound sleep.  Pythagoras encouraged his students to take time in nature, to harmonise themselves with the natural environment.

These stories about Pythagoras inspired me to realise a desire to play music in nature.  I commissioned for a small lyre to be made which could easily be played whilst walking around.  My lyre is made of oak, tuned to the pentatonic scale and is based on a carving relief of Orpheus taming the animals.  I have travelled widely playing my lyre in the environment – from my homeland of Calderdale, West Yorkshire to Cornwall in England and Delphi in Greece.  I have found this activity has helped me to connect with the environment of the places I have visited.  I have also experienced the healing benefits that the lyre brings as well as the pleasure of playing this instrument.

For those who wish to do this – simply take a portable musical instrument or sing, hum or whistle in the environment, whilst focussing on the surroundings, then allow yourself to relax into the experience.  I would recommend practising the Emerald Alignment to balance and align yourself, which will enhance your musical connection to nature.