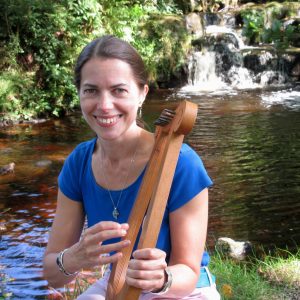 As a child I was drawn to musical instruments and gymnastics.  As an adult I came to recognise the importance of maintaining connection to childhood dreams and interests, which became the foundation of my life’s work.

I went to acrobatics classes and had guitar lessons as a teenager before going to Canterbury Christ Church University, where I graduated in Tourism and Business Studies.  I worked as a Senior Administrator within Atmospheric Science at the University of Cambridge for twelve years.  The role involved general project management and the organisation of international scientific conferences.  During this period, I started attending yoga classes, learned new classical pieces on the guitar and taught myself to play the mandolin.

My social life involved clubbing and parties where drinking large amounts of alcohol was the order of the day but the next morning, after the elation had worn off, I often felt lost and alone.  Although I was playing music, practising yoga and doing a job that was helping the environment, I eventually felt unfulfilled and disillusioned and thought that there must be more to life than this.  I didn’t know where to look or indeed what I was looking for, yet something guided me to my next life-changing step…

In November 2001, whilst visiting my sister in Yorkshire, we attended a seminar about angels presented by Carol Lamb.  At the end of the day, Carol talked through a simple way of releasing stress and tension and restoring balance in our lives – this was the first time I experienced the Emerald Alignment.  I was really inspired by the spiritual teaching and decided I wanted to be a part of this work in some way – I had no idea how but boldly ventured upon a journey that would become my life’s work.

I enrolled on courses in Healing Energies and Soul Recall Therapy with The Academy of Spiritual Sciences and trained in the Rainbow Chakra Toning System.  During this time, I bought a small harp and was encouraged by Carol to teach myself to play intuitively.  I had no musical qualifications and had not created music but with regular practice of the Emerald Alignment prior to playing, the music started coming through.

In 2005, I graduated as an Holistic Therapist and Teacher of Toning.  Through this training I gained a sense of purpose and established Harp Alignment.  I developed harp lessons based on the style of creative music I had taught myself.  I moved from Cambridge to West Yorkshire to work with Rainbow Light Trust.  Postgraduate studies continued with the Academy’s Musical Medicine teacher training and I learned about the healing power of sound vibration from Jennifer Warters.  I offered a Harp Alignment clinic incorporating therapeutic harp music.

I worked as a Care Assistant in a care home for older residents and during this time, developed Healing Music in Community Care.  I went on to present this package to 190 care homes in Great Britain.

Since 1999 I have practised yoga and became a 200-hour Yoga Teacher following training with My Vinyasa Practice in 2021.  Further training with the Academy in 2013 taught me about the release of cellular memory imprints through yoga and playing the harp in a specific therapeutic way.  This prompted a visit to the Ramamani Iyengar Memorial Yoga Institute in Pune, India, where I was taught by Geeta and Prashant Iyengar.  Online yoga sessions are offered, focussing on the release of cellular memory within postures and integrating the practise with intuitive harp music and the Emerald Alignment.  I gained personal experience of the power of yoga to assist with the grieving process following the suicide of my brother.

Listen to my radio interviews: