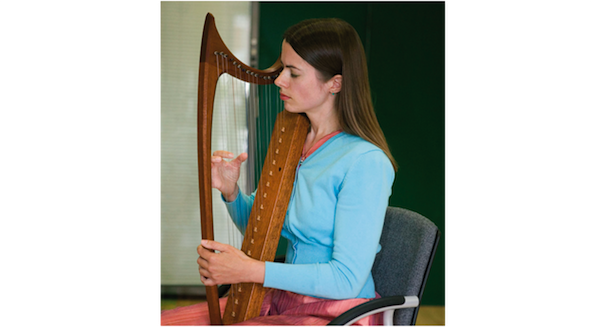 “There is geometry in the humming of the strings,
there is music in the spacing of the spheres.”
Pythagoras

While training in Healing Energies with The Academy of Spiritual Sciences, I bought a small harp and was encouraged by my tutor, Carol Lamb, to teach myself to play intuitively.  Although I already played guitar, I had never created music before and wondered how this would happen…  However, by practising the Emerald Alignment to align my energy to a higher consciousness prior to playing, the music started coming through.  If I started thinking about what I was doing and allow my mind to engage, the musical flow stopped and I would need to align again to reconnect to my intuition.  The more I learned to disengage my mind, the longer I could sustain the intuitive connection, enabling the creative music energy to flow through my body and into the strings.  I felt as if I was in the audience not knowing what was going to come next.  Over time, I became aware of some different musical styles coming through, which led to some musical composition.  I also noticed that mood influenced the music – sadness sounded melancholic and happiness sounded bright and uplifting.

I have taught students to play the small harp intuitively.  The style of music is rooted in the principles of harmony within ancient music as taught by Pythagoras, incorporating simple rhythms and melodies.  The small harp has been played throughout the world for thousands of years.  Lessons are based on the ancient principles of teaching the harp.  Harmonious harp and lyre music has soothed mankind since ancient times: In the bible David played the harp to relieve Saul’s depression and Pythagoras played musical medicine on the lyre to heal the soul.

The Emerald Alignment is incorporated into lessons to encourage creative music energy to flow through the body and into the strings.  Regular practice of the Emerald Alignment aligns the energy field to a higher stream of consciousness, which brings about the ability to play the harp intuitively if the desire is there.

Students are encouraged to explore the strings through plucking and strumming and are often surprised to discover how pleasant their playing sounds.  They initially wonder how their fingers will make certain sounds and I advise them not to think about how it would happen but just to play and allow their fingers to do the work.  At first, the notes can sound a ‘bit random’ but after a few minutes, the music starts to flow through as the connection to intuition is made.  Over time, students become increasingly aware of playing music through feeling instead of thinking.

The teaching style focuses on Muscle Memory, which is linked to motor learning and is a form of procedural memory, with tasks remembered through repetition.  The muscles remember the sequences of repetitive movements, enabling students to repeat the action of plucking strings without having to mentally think about it, which allows them to focus on the feeling of the music.

Learning to play the harp intuitively is healing and enables students to release stress, tension and anxiety in the process of clearing subtle energetic pathways, which connects them to intuition and the ability to play intuitively.  In the West, there can be a tendency to be too mentally active and this style of playing helps clear the mind and relax the body to aid the creative process, which is often stunted if the mind is very active.  Playing the harp intuitively enables students to more readily access the creative aspects of the brain, which improves the flow and sound of their music.

Everyone is unique and we are all influenced by music that we like, our ethnic roots and child/adulthood environment.  When playing music intuitively, although our music may sound similar to others, we each have a sound that is particular to us, which is our unique musical signature.  I hear differences between different students as well as myself; for example, a Scottish student made a Gaelic/Celtic sound and wondered where this had come from (refer to Michael Kowalski’s blog series ‘Where does music come from?’).

Intuitive pieces of music are one-off and unique and although the style may sound similar, any repetition is not exact, unlike composed music.  Initially, students tends to play the same general style but over time, more variation of music comes through as their fingers begin to pluck with more confidence.  This musical technique is a process of opening up and connecting to intuition, which becomes easier and more natural with practice.

For many people, it can be difficult to get in touch with their feelings and playing the harp intuitively helps to express suppressed feelings through music.  The action of playing makes it possible to sense the feelings as they were released from the body and into the strings.  Through this process, there is no need to think about or verbalise the feelings.  Playing intuitive harp music can be comforting and helps release the deep pain of loss and separation.  If students briefly touch on uncomfortable experiences that they do not wish to talk about, their music often reflects the feeling they have mentioned.

My story Cells of the Soul on Paranormal Matters Radio.