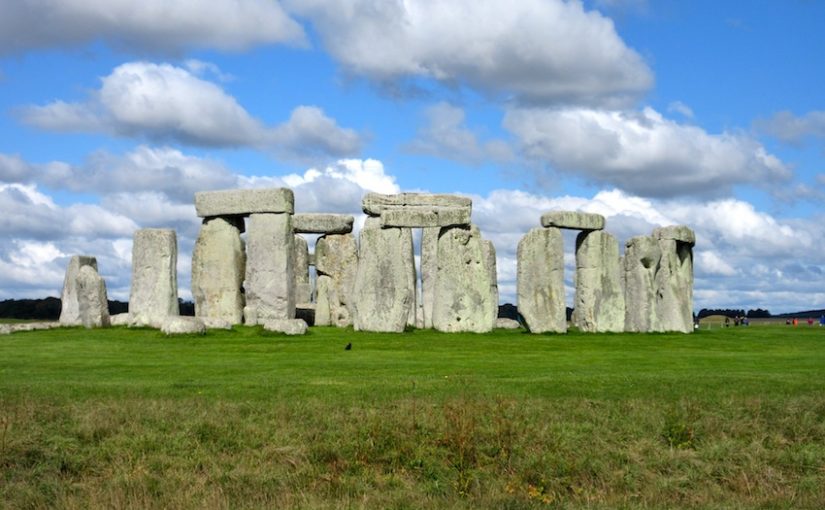 I invite you on a memorable healing journey through some of the ancient sacred sites of southern England. 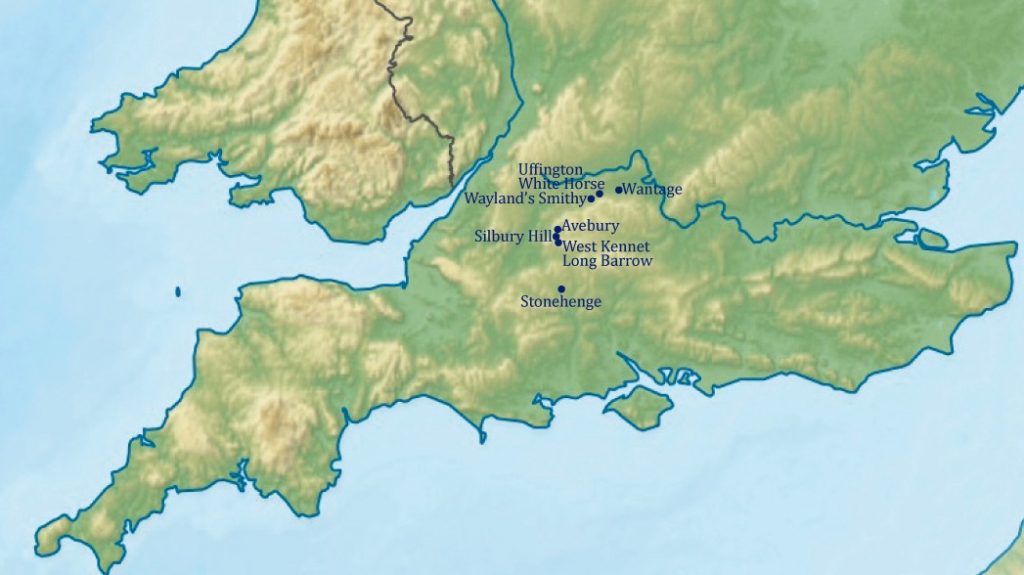 As a child, I lived in southern England and most weekends we walked in the gentle rolling hills of the North Wessex Downs in the countryside around Berkshire, Oxfordshire, Wiltshire and Hampshire.  This landscape is alive with numerous ancient sites built thousands of years ago.  Walking in this countryside instilled in me a strong connection to this landscape, which I only became aware of after we moved to Norfolk when I was 12 years old.  I now realise I had taken this connection for granted and remember feeling a sense of loss from this area in my early teens.

I began to understand memory connections to land in my late 20s, when I trained in healing energies and metaphysics with the Academy of Spiritual Sciences.  I discovered that it is possible to feel non-physical energetic connections to locations where we have lived or visited in present and previous lives.  This helped me understand why I had felt such a longing for the ancient landscape of southern England.

I learned that planting crystals, toning (positive vocal sound vibration) and playing harmonious music aid the release of painful past soul memories and magnify the light of peace in locations.  Since this time, when visiting sites, I plant small crystals, tone and play my lyre, which have given purpose to my journeys and I experience positive connections to the locations. 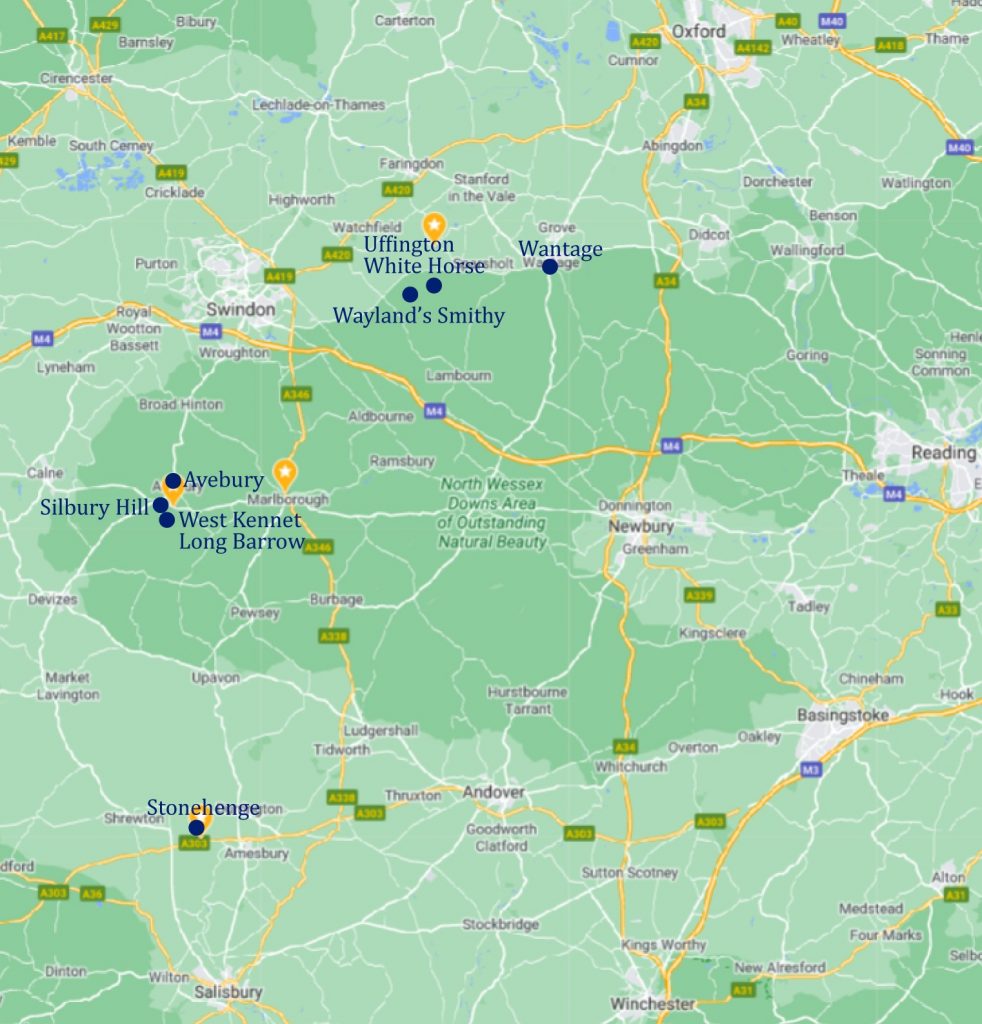 This journey started in Wantage… 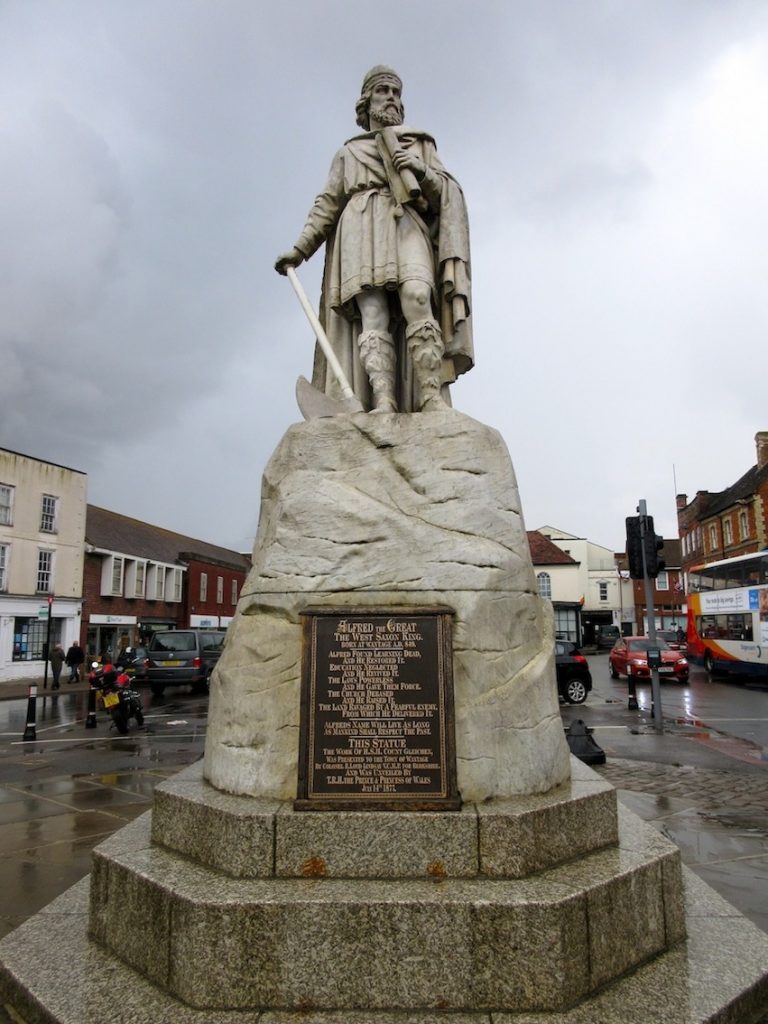 I lived in Wantage until I was 2½ years old and have always felt an affinity with Alfred since regularly seeing his statue in the market square from such a young age and also the knowing that we both spent the earliest parts of our lives in this place. 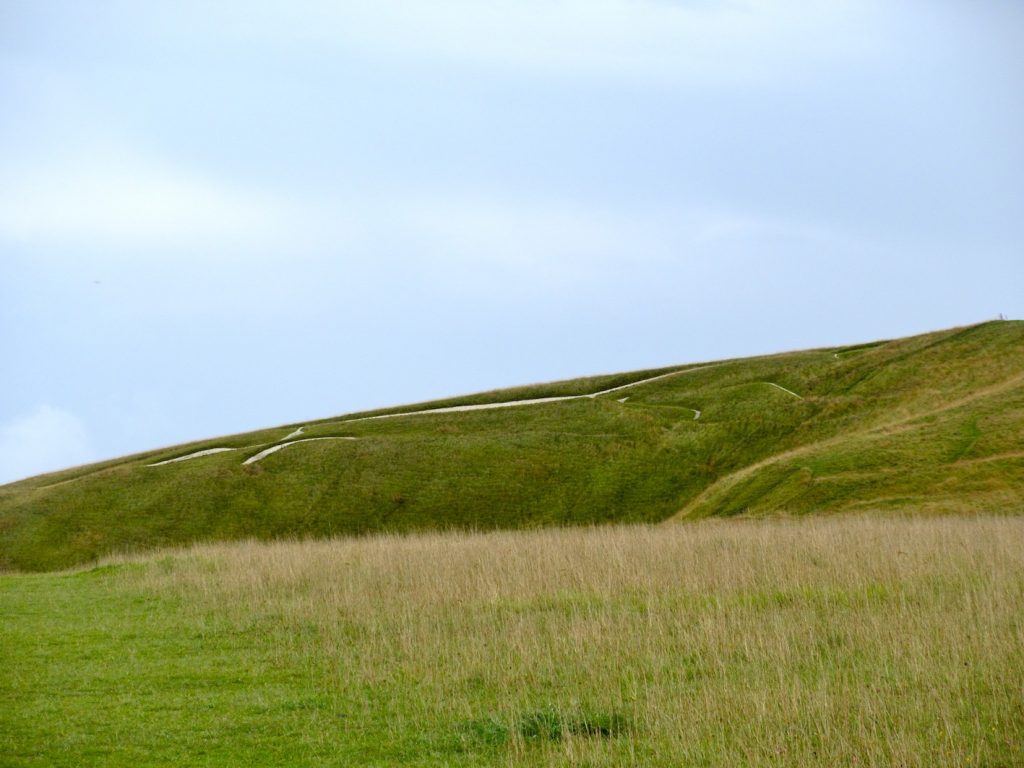 The Uffington White Horse is a prehistoric hill figure 360 feet (110 m) long and formed from trenches filled with white chalk (local stone).  It is not really possible to see the horse from land and is better seen from the sky, which makes me wonder – who made this figure?  It is at least 3000 years old. 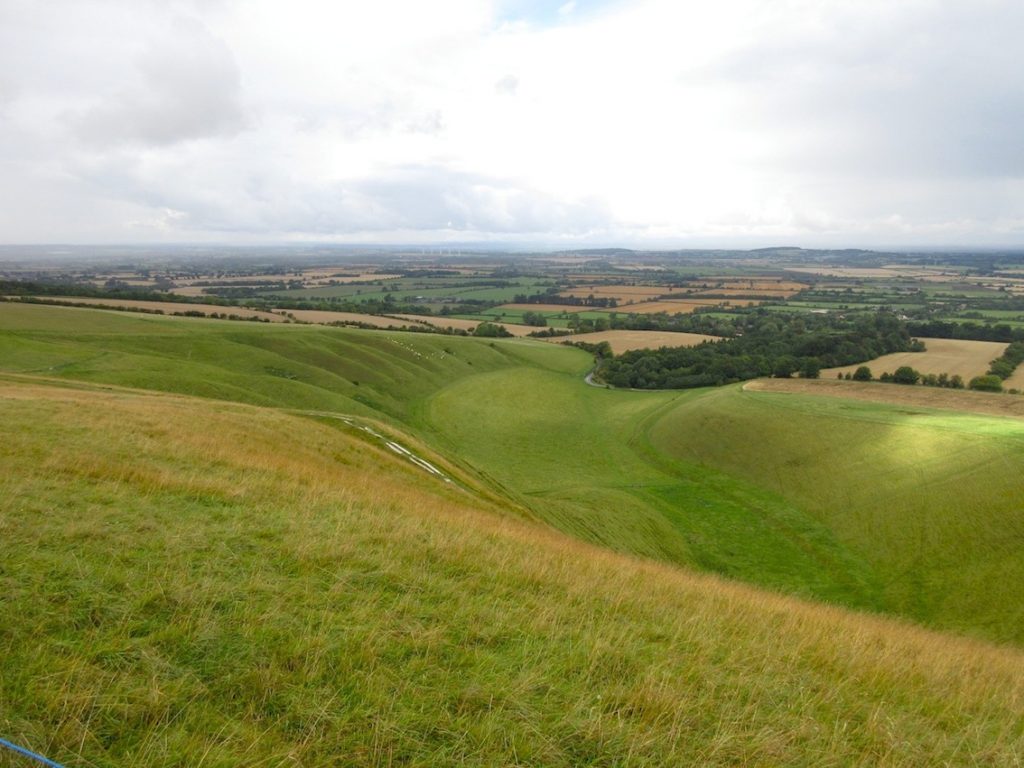 I remember visiting as a child and marvelling at the chalk on the ground – I didn’t appreciate the wonderful views.  Returning as an adult and playing the lyre while overlooking the vast landscape enriched my childhood memories. 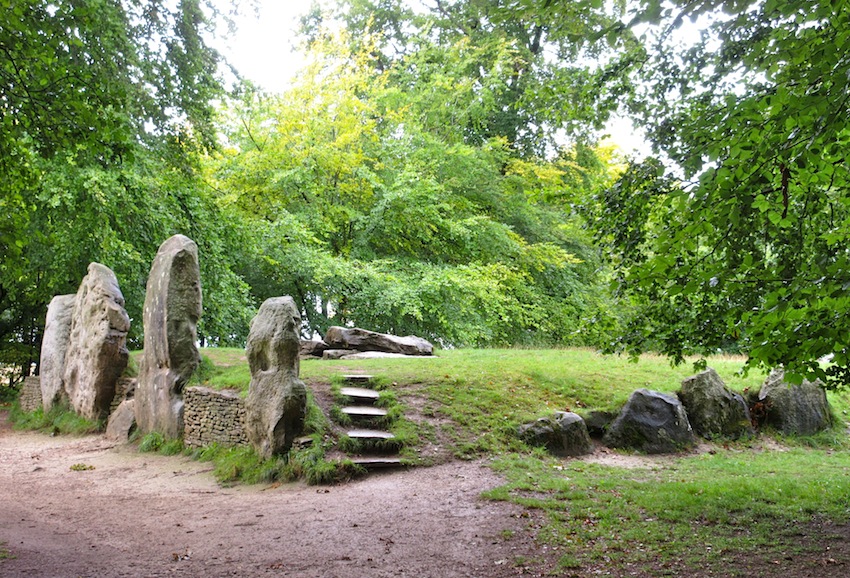 Wayland’s Smithy is a chambered long barrow dating back to 3590 BC.  It is located along the ancient Ridgeway path and was believed to have been the home of Wayland, the Saxon god of metal working.  It is 185 feet (56 m) long and 43 feet (13 m) wide. 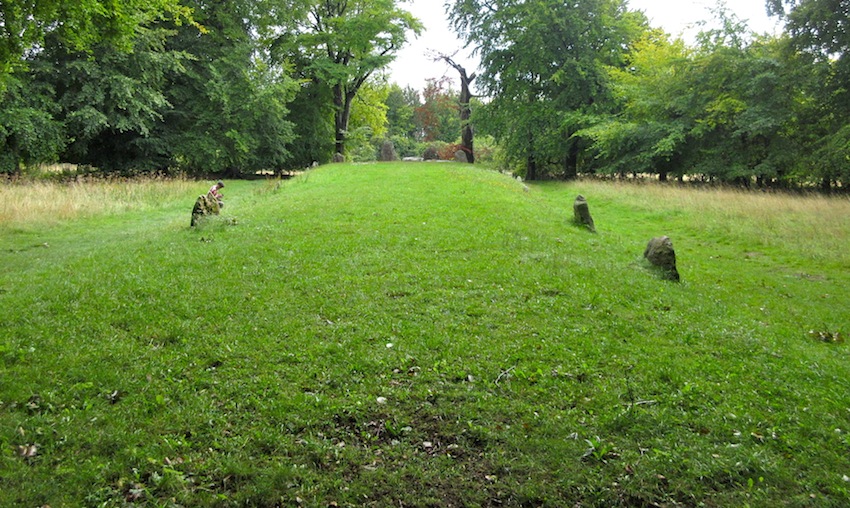 We walked from the Uffington Horse down The Ridgeway to Wayland’s Smithy, where we had the place to ourselves, perhaps because it had rained through the afternoon.  I enjoyed playing my lyre around the length of the barrow before resting on a fallen tree log to absorb the peaceful atmosphere. 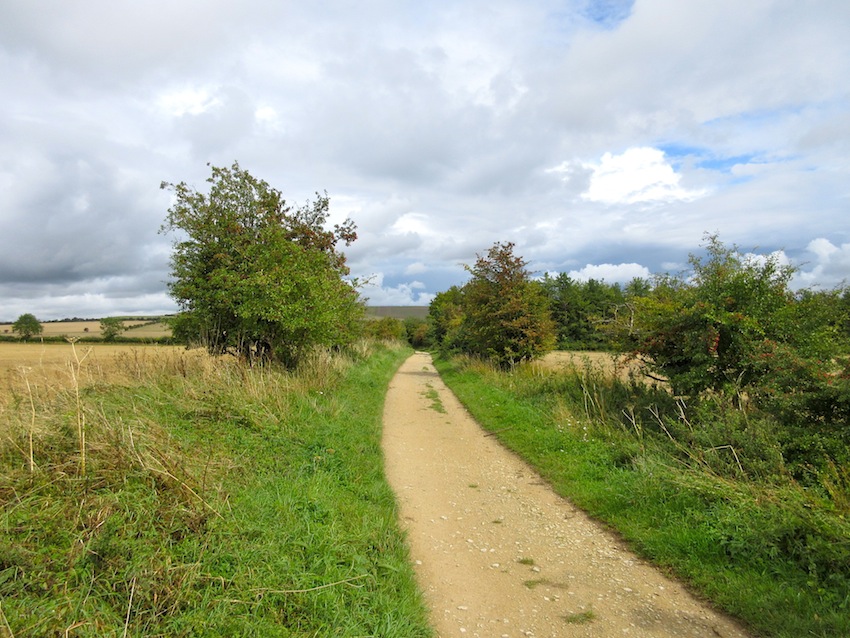 The Ridgeway is an ancient path running through a few English counties, including Berkshire, Oxfordshire and Wiltshire.  It connects with another ancient track, the Icknield Way, for some of its course.  The path is at least 5000 years old and links with many ancient locations, including Avebury, Uffington White Horse, Wayland’s Smithy and Wantage. 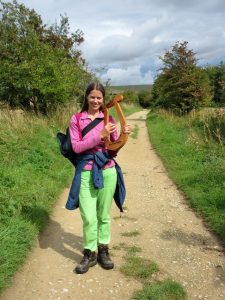 We often walked this path as a family and I remember feeling a connection to the natural environment of rolling hills, sarsen stones, flint, chalk, birds, animals and trees along the way.  When I hear the name ‘The Ridgeway’, it evokes deep feelings of ancient landscapes and powerful myths from another time.  Walking the path on this journey positively reconnected me to memories of being in these magical ancestral lands. 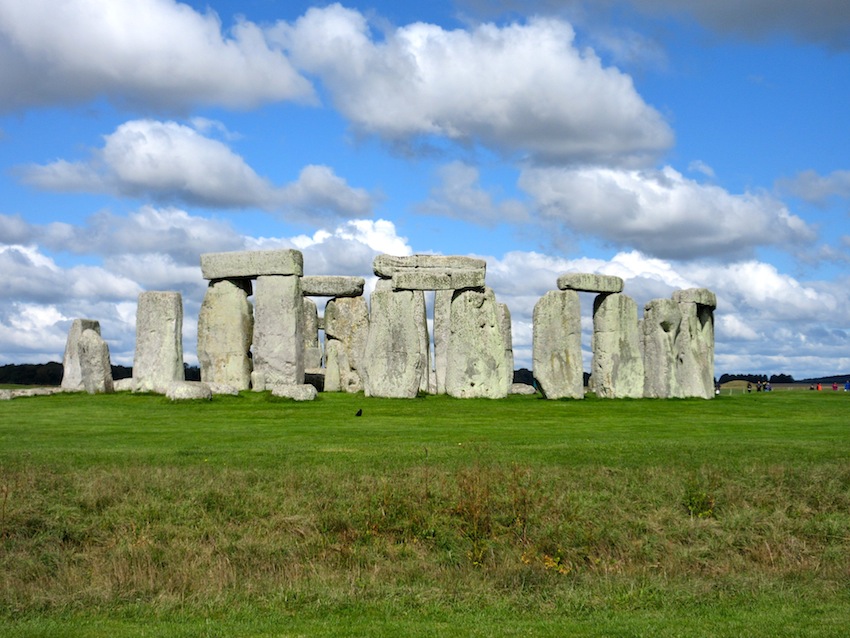 Stonehenge is located on Salisbury Plain, which is a chalk plateau.  The sarsen stones are placed in a ring, which are within a rounded earthwork.  Individual stones are approximately 13 feet (4 m) high and 7 feet (2.1 m) wide and weigh around 25 tons.  One of the most renowned ancient sites in the world, Stonehenge has been dated to around 5000 years old although I believe it is older.  We can only marvel at the structure, even in its partially ruined state and wonder at how the stones were brought here and placed upon one another. 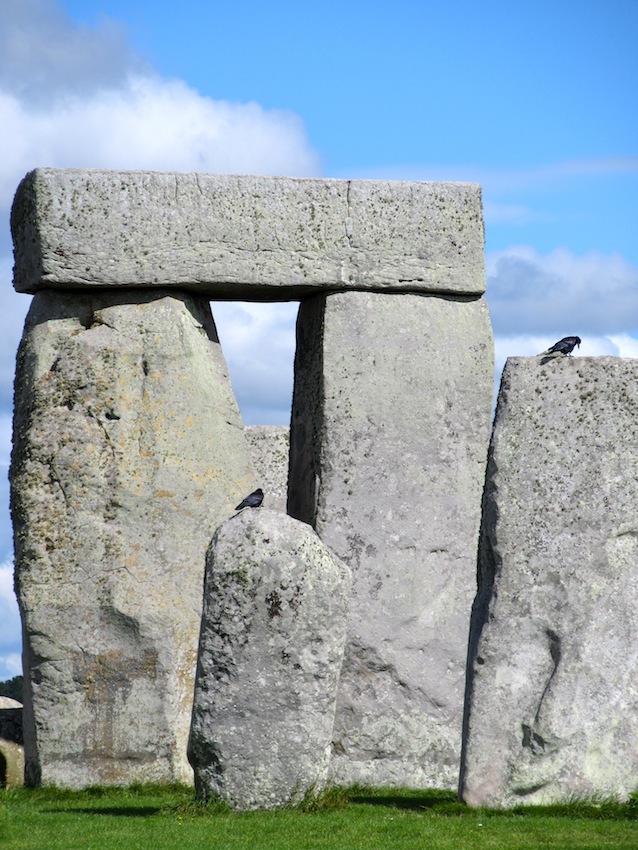 In the 1970s, Stonehenge was not fenced off and my family walked among the stones when I was 2 years old.  I have a clear memory of this visit and in particular noticing lichen on the stones.  Although I was not remembering in language, I knew what it was and that I had seen the stones at another time when they did not have lichen.  I now realise this was a past life memory.  I feel blessed to have this memory because access to the inner circle is now restricted. 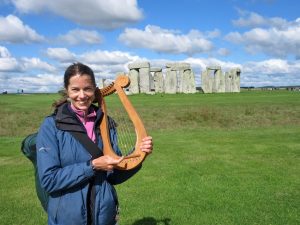 On this journey, we were mesmerised by the wonder and majesty radiating off the stones.  The atmosphere was enhanced by the wind playing through the lyre’s strings making the ethereal sound of an Aeolian harp. 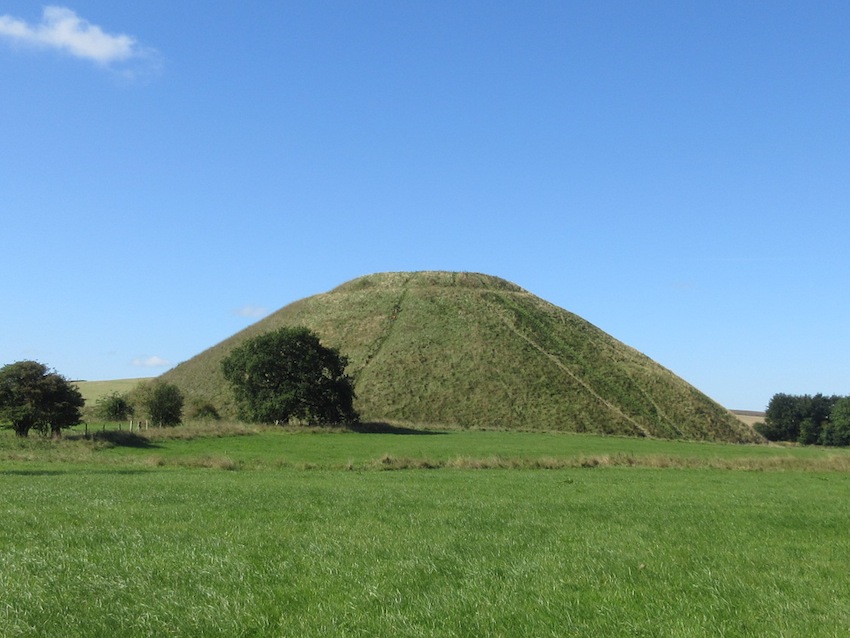 Silbury Hill is a chalk mound within the complex of Neolithic monuments around Avebury.  At 129 feet (39 m) high, it is the tallest known prehistoric man-made mound in Europe and one of the largest in the world.  It is believed to have been built around 2400 BC. 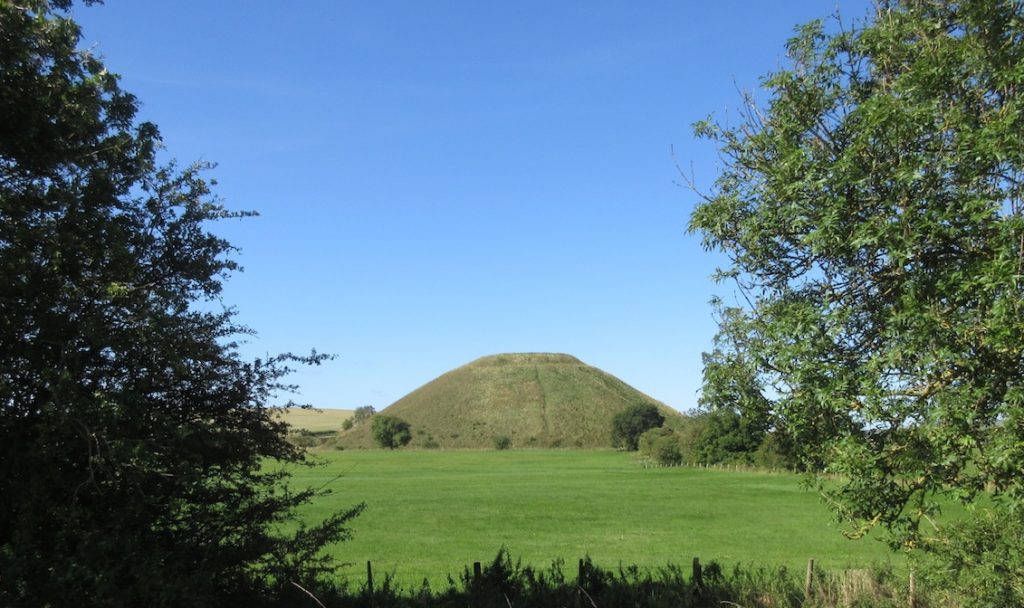 As a child, I would gaze at Silbury Hill when we drove by on the A4 because it felt evocative of an ancient landmark, built by our ancestors.  It has imprinted into my memory a love of small, rounded hills in flatter surrounds and when I see them, I often wonder if our Celtic ancestors have made them. 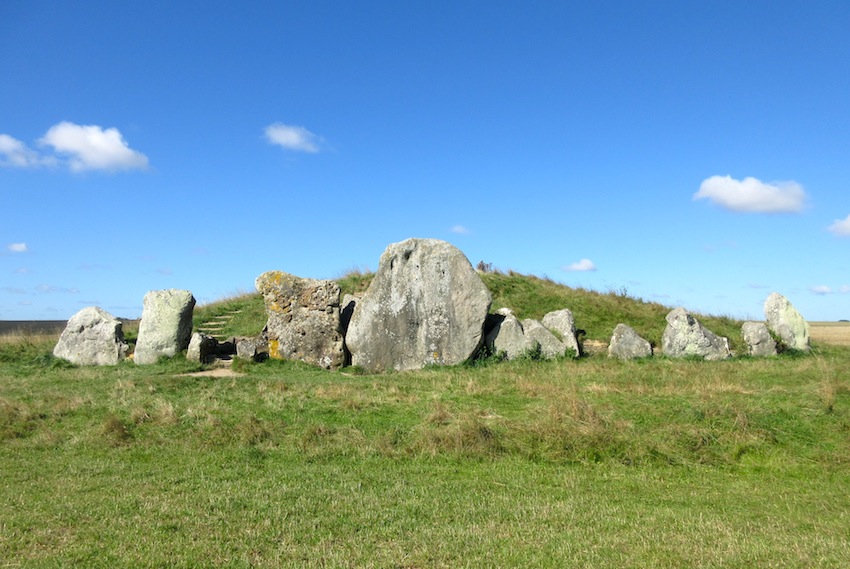 West Kennet Long Barrow is a chambered long barrow close to Silbury Hill and is believed to date back to 3700 BC.  It is 328 feet (100 m) long and a maximum of 82 feet (25 m) wide at the east entrance and was built with local sarsen stones. 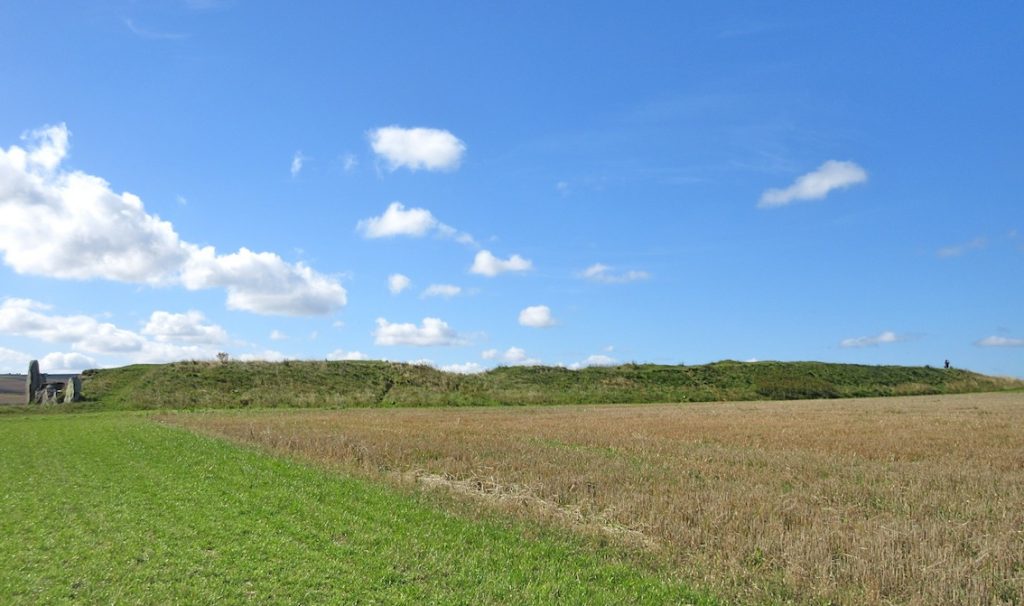 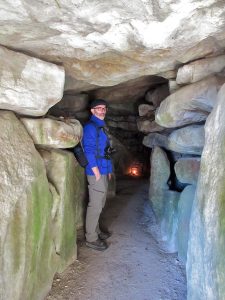 We were welcomed into the peaceful chamber by the light of a single candle at the west end.  There was a respectful simplicity to this sacred inner space, which encouraged a quiet moment to pause and connect with the surrounding sarsen stones. 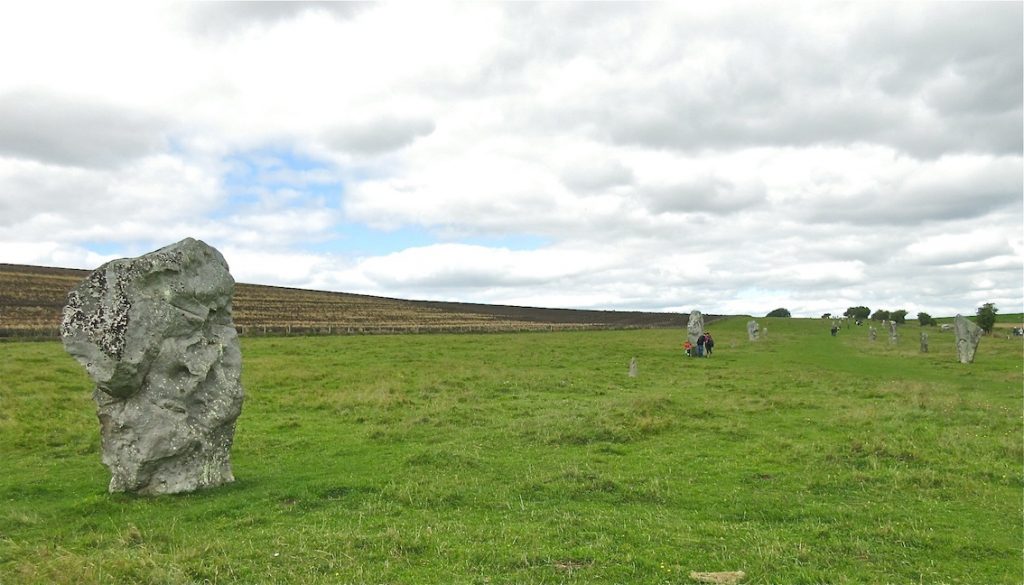 West Kennet Avenue is believed to date back to 2200 BC.  It originally consisted of 100 pairs of standing sarsen stones in two rows, forming a 1.5-mile link between The Sanctuary and Avebury stone circles. 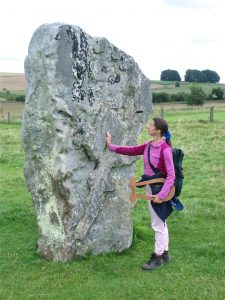 The stones felt grand and imposing close to and walking up the avenue towards Avebury created a sense of approaching a place of great significance.  We can only wonder at the views and experiences that our ancestors had a few thousand years ago. 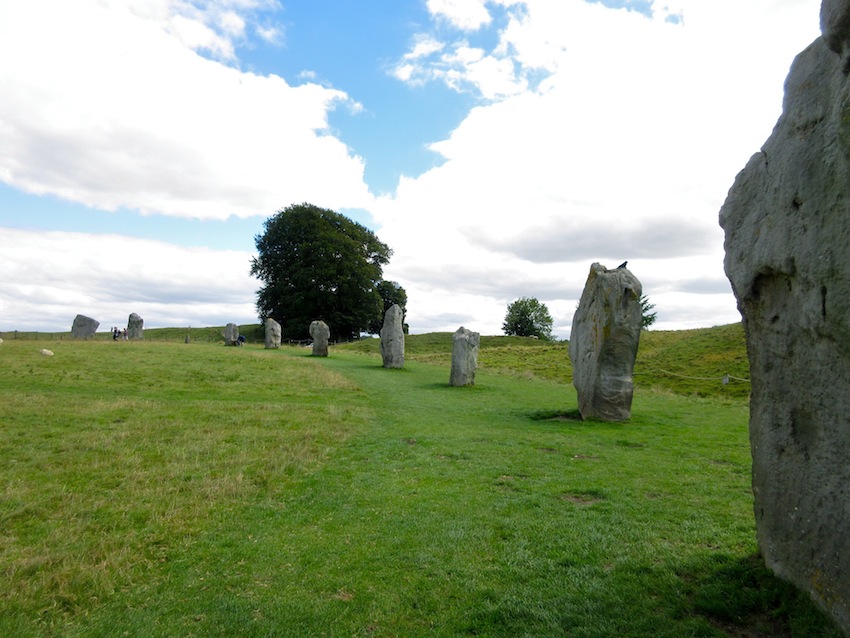 Avebury has three stone circles contained within a large circular henge (bank and ditch earthwork).  One of the stone circles is the largest in the world.  The site was damaged by local people in the late Medieval period but was protected during the 20th century, when it was partially restored. 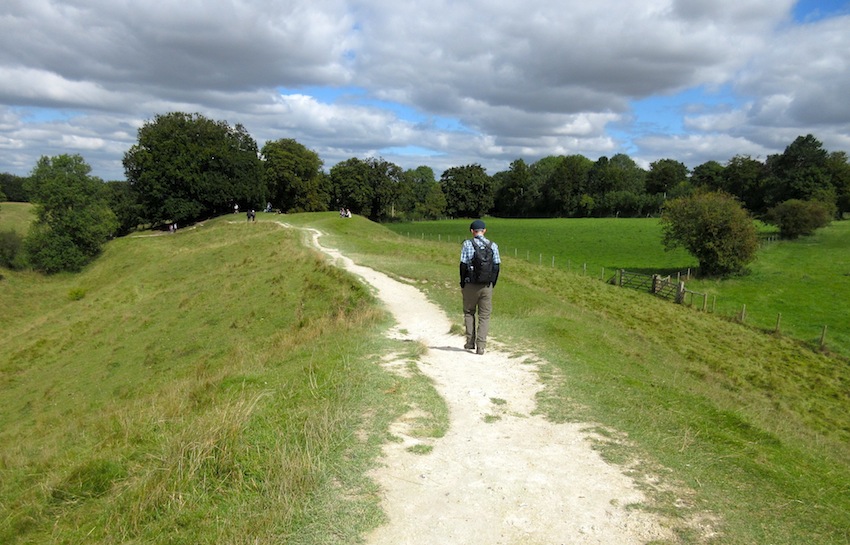 Archaeologists believe the henge had the appearance of gleaming white chalk and was much higher and deeper than it is now.  Walking the chalk path in the present day reveals a glimmer of the white effect seen by people thousands of years ago. 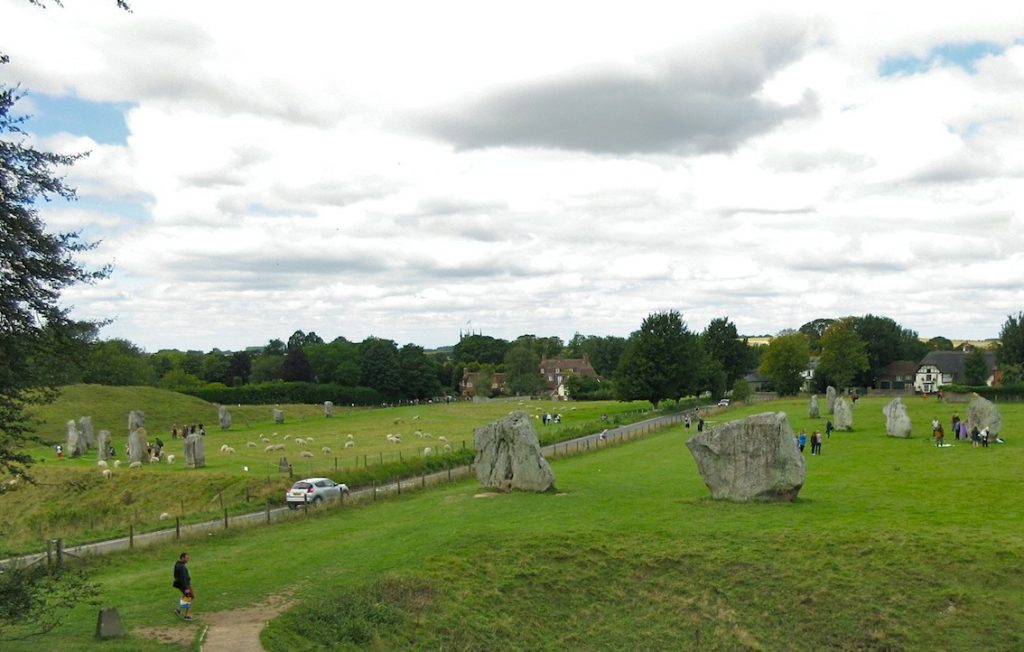 Journeying through the stones today, we had a sense of Avebury’s enormous significance to our Celtic ancestors, with approaching avenues, gleaming white chalk and the sheer size of the site and its stones.

I feel lighter for the release of memories of loss through crystal planting and now feel a positive connection to this sacred landscape, without feeling a sense of loss upon leaving.  This journey has also connected me to the ancient sites through sound by toning and playing lyre music.

Independent investigations into sound are demonstrating that some of these ancient sites resonate sound in a particular way, including Stonehenge, Avebury and West Kennet Long Barrow.  Some researchers have described Stonehenge as ‘Soundhenge’ because of the way sound is conducted around the monument.  I believe this is beginning to reveal that ancient people’s understanding of and respect for the power of sacred sound vibration is far beyond our awareness today.

Blog: The Power of Good Vibrations