Following training in Musical Medicine with The Academy of Spiritual Sciences, I learned that playing harmonious music in the natural environment can be healing because it encourages us to reconnect and harmonise ourselves with nature.  This activity can help us gain a greater awareness and respect for our environment, including the rocks, rivers, trees, animals, birds, skies etc., which are all made up from the four elements of fire, air, water and earth.  Simply play a musical instrument or sing, hum or whistle out in the environment, focus on the surroundings, relax into the experience and observe yours and the natural world’s behaviour.

Scientific Research of Music on Nature and Animals

Dorothy Retallack carried out research into the effects of music on plants and discovered that their health and growth thrived when positive, harmonious music was played to them.  In contrast, the findings demonstrated that plants deteriorated and eventually died when heavy rock music was played to them.  For further details, read Don Robertson’s article: About Positive Music – The Plant Experiments. 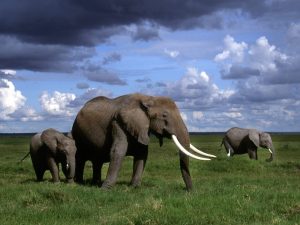 Scientists from Queen’s University, Belfast discovered that the abnormal and unnatural behaviour of elephants in the captive environment of Belfast Zoo reduced greatly when the classical of Mozart, Elgar, Handel and Beethoven were played to them.  For further details, read: ‘Animal welfare: Classical music soothes the wanderlust of zoo elephants’.

Dr Masaru Emoto, a Japanese researcher, took photographs of frozen water crystals that had been exposed to positive and negative music prior to freezing.  The results showed that water that had harmonious music played to it produced clear and strongly structured crystals; whereas water that had heavy metal played to it appeared broken up and chaotic.

It is important to play musical scales that conform to the ancient principles of harmony, as opposed to some of the modern styles of dissonant sounds, which have a negative impact upon the environment (from the above research).  Pythagoras taught us the musical ratios that produce harmonious music, which form the basis of the western musical scale.  Appropriate musical scales include the 7-note major and minor scales and the 5-note pentatonic scale (CDEGA). Rhythm and melody also play key roles in making harmonious music – as a general rule, play music based on traditional world folk music or classical music played in the major or minor keys.

As a preparation, regularly practice the Emerald Alignment to align your energy field to a higher stream of consciousness, which will encourage and enhance the playing of harmonious music.

Music can be played to have a positive effect on the environment when at home or indoors by connecting to the Rays of Peace global peace meditation at any one of the quarters of the clock: 12.00, 3.00, 6.00 or 9.00, whilst asking that the music be sent for the current meditation focus.  Read the Playing Music for Global Peace blog.

Playing music for the environment or when in nature can also inspire music creation for a place or event, e.g. the Japanese earthquake, tsunami and nuclear reactor leak event of 11th March 2011, which impacted the environment with global consequences.