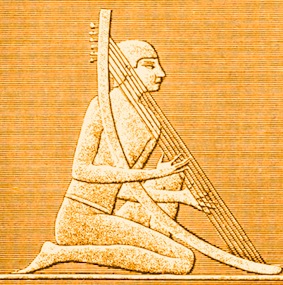 The harp has been described as an instrument that creates a bridge between the physical and non-physical worlds.

The Ancient Egyptians revered the harp as a sacred instrument, which guided the soul through transition from the physical life to the afterlife.  The Egyptian Pharaoh, Ramses III, had many bow harps painted in his tomb.

In the Mesopotamian Royal Tombs of Ur, harps were found buried with deceased rulers.  At the burial ritual, the ruler’s personal attendants were entombed in the inner chamber, where it is believed that they played their harps to assist the safe transition of the ruler into the next world.  As with the Egyptian custom, harps and harpists were recognised in Mesopotamia as valuable in assuring souls through this safe transition.

In these ancient cultures, it was considered an honour for a harpist to be entombed with their deceased ruler to aid the transition process.  It was believed that this act would greatly assist the journey of the harpist’s soul as well.

I believe this ancient wisdom to be true.  When I hear that someone is coming to the end of their life, I play ‘Beyond the Sea’, to support them through the transition process to the next part of their soul journey.  I played healing music in many care and nursing homes in Great Britain and played this piece when appropriate.